I have listed a new property at 9711 FINN RD in Richmond.
See details here
Lovely, circa 1910 , HERITAGE home nestled amongst 5.42 Acres of Agricultural Land just 25 minutes to downtown Vancouver. This 3577 sq.ft. home features 4 spacious bedrooms on the top level with a spacious ensuite bath. The main living area boasts original hardwood floors in the dining and living rooms, many original features from 1910, and a spacious family room with a wood burning stove. There is a lovely large SW facing deck off the family room overlooking farmland and mature landscaping. This home presents an exceptional opportunity for those who appreciate Heritage homes and would like to renovate this beauty. Other features include an active cedar tree farm as well as a vegetable farm on 2.5 acres. Viewings BY APPT ONLY.
Read 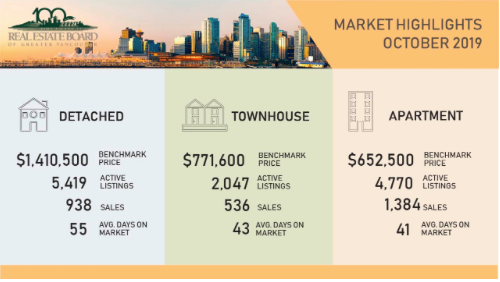 Last month’s sales were 9.8 per cent above the 10-year October sales average.

“Home buyers have more confidence today than we saw in the first half of the year,” says Ashley Smith, REBGV president. “With prices edging down over the last year and interest rates remaining low, hopeful home buyers are becoming more active this fall.”

“The recent uptick in home sales is moving us into a more historically typical market,” Smith said. “Both sale and listing activity is trending around our long-term averages in recent months.”

The MLS® Home Price Index composite benchmark price for all residential properties in Metro Vancouver is currently $992,900. This represents a 6.4 per cent decrease from October 2018, a 1.7 per cent decrease over the past six months, and a 0.2 per cent increase compared to September 2019. I have listed a new property at 4936 EDENDALE LANE in West Vancouver.
See details here
FANTASTIC DOWNSIZING HOME in the heart of Caulfeild!!! This incredibly elegant 2400 square foot detached home on 2 levels is exactly what many people in the area are looking for! With OCEAN living space upstairs and VIEWS of the Lions Gate Bridge, Downtown and Vancouver Island what more can you ask for! 3 Bedrooms, 3 bathrooms, Double Car Garage - simply perfect for locking up and travelling and still having a great place to come back to in West Vancouver! LIFE MADE SIMPLE AND GREAT PRICE!
Read

First Nations are poised to become the next real estate development power-brokers in Metro Vancouver, with billions of dollars worth of real estate on and off reserves at their disposal.

Westbank Corp., Polygon, Aquilini and Darwin Properties all have partnerships with local First Nations to build thousands of units of housing and commercial space in Vancouver, Burnaby and West Vancouver.

“First Nations have first right of refusal when the provincial or federal government disposes of land and they are actively making those deals,” said Indigenous planner Ginger Gosnell-Myers, formerly with the City of Vancouver.

“The nations are going to buy everything, they are buying their own land back and they will develop it so that they have income security,” she said.

MST Development Corp. — a land development firm jointly owned by the Squamish, Musqueam and Tsleil-Waututh First Nations — was ranked No. 1 on Vancouver Magazine’s Power 50 list this week. The partnership is “poised to reshape the city, with a mixture of market and social housing, as well as some much-needed community contributions,” according to VanMag.

MST owns 65 hectares worth more than $2 billion, including 21 hectares at Jericho and eight hectares at 33rd Avenue and Heather Street on the west side of Vancouver.

MST recently bought a parcel in West Vancouver and the Musqueam and Tsleil-Waututh have a partnership with Aquilini Development and Construction on 16 hectares near Canada Way and Willingdon Avenue in Burnaby.

“People are still scratching their heads and rubbing their eyes wondering what it means,” said Gosnell-Myers, who is about to start a three-year fellowship with Simon Fraser University focusing on decolonization and urban Indigenous planning.

Bureaucratic inertia is holding municipalities back from properly servicing the areas around what will soon be new, high-density neighbourhoods, she said.

“The District of North Vancouver has left the Tsleil-Waututh Nation’s Raven Woods development floating like an island in the ocean with nothing around it,” she said. “Municipalities need to step up with community centres, schools, transit and all the things that make cities cities.”

Developers are increasingly looking to First Nations land as a way around a municipal development process that is mired in bureaucracy and largely failing to supply the market for housing, the industry says.

“First Nations partnerships represent a new opportunity for our home, office and industrial builders to create communities that can get built quickly with less red tape, delivering the homes people need to rent or buy now,” said Anne McMullin, CEO of the Urban Development Institute.

Only two municipalities in Metro Vancouver met their regional growth targets between 2011 and 2018, with some missing their housing goals by 80 per cent, according to an analysis by HAVAN, the homebuilders association of Vancouver.

The Squamish First Nation made headlines this week when it revealed a new vision for a five-hectare parcel at Kits Point, which includes 6,000 units of housing in 11 towers to be developed in partnership with Westbank Corp. Because the property is on reserve, the City of Vancouver has no control over how the land is developed.

The Musqueam First Nation is developing a nine-hectare parcel in the University Endowment Lands at UBC on land that was returned to its control by the provincial government, which made the Musqueam fee simple owners.

Lelem —meaning “home” — will include 1,250 rental units, commercial space and public amenities such as parks, a community centre and a daycare, according to Alex Laguardia, chief financial officer of Musqueam Capital Corporation.

The Musqueam are developing the land in cooperation with the UEL, so it, too, is beyond the control of the City of Vancouver, even though it is not technically reserve land.

The first phase includes high-rise towers with one-, two- and three-bedroom apartments and townhomes, and a retail plaza, being built by Polygon.

The Tsleil-Waututh First Nation has been butting heads with the District of North Vancouver over an 18-hectare parcel near the northern foot of the Iron Workers Memorial Bridge.

The First Nation has recently applied to Crown-Indigenous Relations and Northern Affairs Canada to have that land added to its reserve, which would allow it to control the form and scale of development independent of the district.

A new federal law allows First Nations to add lands to their reserve to advance reconciliation and create economic opportunities.

Projects built off reserve lands will be subject to the local municipality’s requirements for social housing, while on-reserve projects are not.

The Squamish Nation is considering providing some affordable units to its members at Senakw. The Musqueam say it is too soon to determine the rents at Lelem.